skip to main | skip to sidebar

Tonight a bunch of people went out to the clubs and did not get back until 6:00am! We left for Kumasi at 7:00am! I could not have done that, but props to them for all being on time. On our way to the Botanical Gardens we drove by Rita Marley’s house! The Botanical Gardens were absolutely beautiful! We saw a cocoa tree, and a hollow tree that we could walk through and look up to see the sky at the other end! There were some really amazing scenes – men trimming already designed hedges with machetes, hibiscus flowers, humungous tress that people sometimes would build houses off of, a tree covered in leaves that looked like the tree of life, etc. It was actually the way that I pictured all of Ghana to look like. After 5 hours we arrived in Kumasi, at the most ghetto hotel possible – Frank David Hotel. 4 cedis per night. Ew. The room I started in would not lock, so we got switched to a room where neither the main light or the bathroom light worked, and even though I requested another switch, they just came in an did a little handy work and fixed the lights in about 10 or 15 minutes. Oh, and there was a condom in the toilet. Yay. Steph even saw blood on the floor at 1:00am in the lobby. Sketchy! 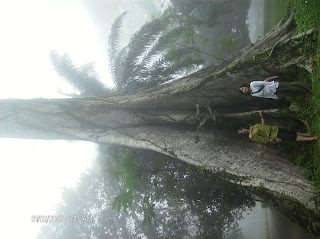 Started off the day by going to the old Palace Museum where the tour guide really wanted to make our tour snappy. I learned that the Queen Mother is the chief’s Aunt or Sister or whatever woman in his family he chooses. We went to the Culture Centre, where there was a bunch of really cool shops. Then we ended the day with dinner and drinks for Erica’s birthday. We attempted going to a club but it was pretty lame – not enough people. The market in Kumasi was unreal. The people who actually went into it said it was horrible and that they could not walk anywhere without being pulled and touched, so I am glad I just looked upon it from the bridge. 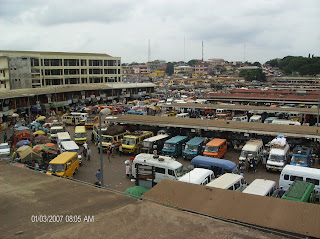 Today we got on a bus at 10:00am to take us to Tamale. Once we arrived in Tamale we got our rooms, and my room has AC! The heat here seems pretty unbearable, but it is a different kind of heat as it is drier than Accra. Tamale is an Islamic town, which is very interesting to me, so hopefully I will learn a lot in the next couple days. Dinner tonight was AMAZING! I can’t believe I have been on this adventure for 18 days now. Yesterday I was feeling very angry and hostile towards the shops people that would try to push me into buying things, but I am feeling a little bit better today about everything… just trying to accept and get used to the harassment, which feels really difficult now that I am out of my “honeymoon” phase. I think I will really enjoy this next week though, so hopefully that will change my mind. I can’t believe there are only 17 days left!!

Drumming and dancing was really fun today! The performance we watched was incredible. The costumes that they wore were so nice, and really added to the dances and entertainment for the audience. The performance was located right beside a preschool of happy, singing children who were absolutely adorable! They knew every word to every song that the teacher would start singing, and they absolutely loved that we were videoing them. After the performance we received dancing and drumming lessons. The dancing was a lot of fun and a great work out, but very long and it was really hot outside! The teaching style of the drumming was horrible – the drummer just started playing and we had to just catch on ourselves, which to me wasn’t that difficult, but for some of the other girls I think it was quite a challenge. After our morning work out we went for Ghanaian food. Everything tasted like fish. It was gross. I barely ate. After that lovely experience, we went to the market where I bought some really nice fabric and got a man name Master Salaam to make me two skirts and a headscarf on the spot, which was so nice of him because he dropped everything he was doing to make my clothes. This week, I am becoming an African Muslim woman. 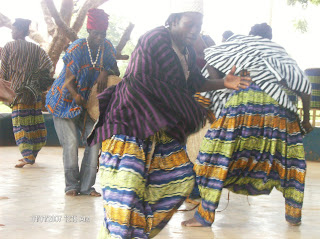 Drumming and dancing today was fun but it seemed to go on forever – 3 hours of dance and 30 min of drums. We polished and completed the dance that we started yesterday. However, getting to dance today was a bit of a hassle as there was a torrential downpour all morning, and only one taxi to take us all by driving there and back three times. This was one of the first times that I have ever been “cold” since I have been in Africa (but as soon as the danced commenced I was sweating buckets again…). The drum teachers were still poor at teaching but the beats were not too difficult today. After we cabbed back and got some GOOD food at the guest house (as usual!). After lunch we went to a Shea Butter Co-op, which was a very educational and eye-opening experience. Ghana is where major companies like The Body Shop import their Shea Butter for their products, and these women who spend an entire day to make one bag… they have NOTHING. We all purchased quite a bit from them, which will make very nice gifts, and is just nice to have supported them. They are all such nice, beautiful women and they work so hard that it breaks my heart to see how poor they are living. I don’t think that I can support the Body Shop anymore after seeing where their products come from and how they rip these women off. Some girls and I went back to the market once we were home from the Co-op, and I bought two large, sheer headscarves. Once I had the veil around me in the style that their women wear them, it was as though I had transformed. I walked out of the shop to hear “OH! You are so beautiful!” from the girl across the path. Every single woman who passed by stopped to tell me how beautiful I am and shake my hand and look at me. It was an experience I have definitely never felt before – as thought I was a celebrity. As we continued to walk through and out of the market, it got very loud. Everybody wanted to talk to me and called me Ama Lia. I am not sure the meaning of this… somebody said it meant “just married” but I don’t think so because so many of the young girls were wearing the scarves in that fashion. The respect I was given once I was no longer showing skin, and blending in is magnified immensely. Religion is such a fascinating part of life. Getting attention from women in Ghana was a very odd feeling, and since I was covered up, the men left me alone! 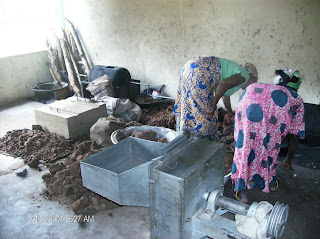 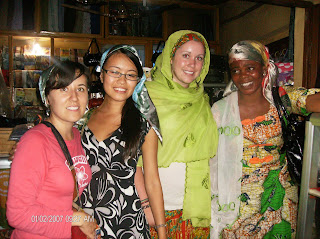 Shea Butter Co-op and Cathy, Linda, myself, and a woman at the market

The road to Mole was long and bumpy. 90km took us about five hours to conquer, but it was totally worth it. When we arrived we immediately were greeted by warthogs and baboons. Heather, Derek and Katie went on the afternoon safari while myself, Roshanak, Steph, Erica and Deirdre hung out by the pool. This was the first day that I was completely and totally relaxed in a very long time. The view from behind our room is incredible! It overlooks a cliff, where you can look down to see the horizon. 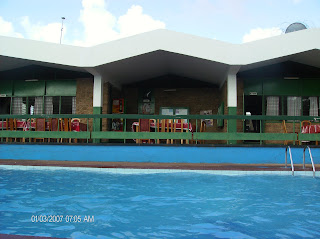 This morning we woke up before 6:00am to be ready for our foot safari for 7:00am. As I forgot my shoes in Accra, I was forced to wear rain boots, which was instantly sweaty and gross, but thankfully they fit me properly, as Derek got a huge bloody blister the day before from them, and some of the English girls that were on the tour said that their feet hurt immediately. Our guide’s name is James, he is a small Ghanaian man with a shotgun on his back, fully dressed in a green safari styled Mole uniform. He first explained to us some rules and then we were off to the greenery (I would say jungle or forest, but neither of those terms really define the landscape, as there were patches of trees, and thicker-bushed areas, but never really “forest” or “jungle”-like areas). Within the first five minutes off the trail we encountered five elephants! They are absolutely beautiful – such calm, giant, peaceful animals. We then chose a new path where we came across antelopes and bush bucks. The bush bucks have a very strange bark-like call. They almost sound like dogs – this is strange because their appearance is almost exact to the North American deer. After all of the skittish deer we hiked down a hill with a destination of the waterhole. We saw a hyena footprint (which you can distinguish from a lion’s foot print because lions do not have claws in their prints where hyenas do), an elephant footprint, and more elephants Once we hiked back up the hill, we realized that we were right at the look-out from the residences, and the elephants by the waterhole were clearly visible. After returning my boots I sat at the look out with Erica and Roshanak for a bit and just watched the elephants. What a view! Mole was definitely an experience I will never forget. While we were walking on the safari this morning, Katie woke up to noises that sounded like people were trying to break into our dorm. After a slight panic attack she opened the front door to find about thirty baboons destroying the residence, peeing on a truck, and throwing bottles all over the place. ONLY IN GHANA! 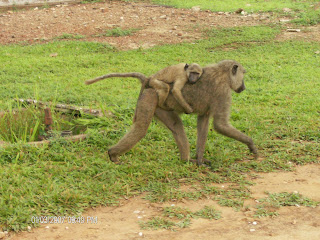 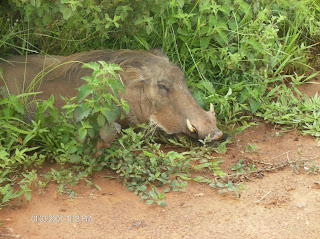 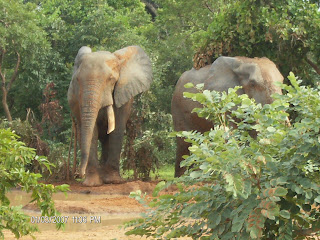 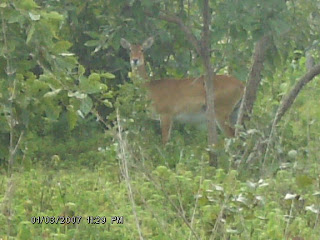 baboons, warthogs (puumba!), elephants, and antelope on the hike!

Took a 16 hour bus ride to Accra straight from Tamale – was supposed to be 12 hours, but our bus had lots of problems (of course) so it took some extra time. Something interesting that I noticed is that most of the shops here in Ghana have religious names, and depending on the city you are in, the outcome is on different religions. In Accra/Legon it’s all about Jesus, but in Tamale and locations nearby, they praise Allah. At the bus station in Tamale there was a shop called “Sister Mary’s Store: Who Praise Jah No One Cares.” Rasta haters!!
Posted by Jillian Fulton at 12:29 PM